Vanderbilt University Medical Center (VUMC) have added a germ killing robots to their already stringent disinfection protocols as a proactive measure to protect patients from serious and potentially deadly hospital-acquired infections (HAIs). This advanced germ-fighting technology is being used by VUMC to raise the level of care and safety for their patients and healthcare professionals. 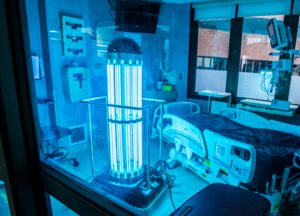 Germ killing robots are being used in Vanderbilt University Medical Center (VUMC) to kill germs and to promote an aseptic environment, safeguarding patients from infectious germs and bacteria. These germ-killing robots are being deployed in various inpatient areas, beginning this month in the burn unit at VUMC – Vanderbilt University Medical Center.

are often preventable, however, require careful precautions to ensure patient safety. Therefore, in an attempt to prevent healthcare-associated infections, the germ killing robot is wheeled in to the healthcare facility and is activated. The robot floods the room with ultraviolet radiation (UV) in amounts sufficient to kill microorganisms that may reside on surfaces, the same microorganisms that pose risk of infection to the patient. These microorganisms include drug-resistant organisms such as methicillin-resistant Staphylococcus aureus (MRSA), vancomycin-resistant Enterococcus (VRE) and multi-drug-resistant Mycobacterium tuberculosis (MDR-TB).

Germ killing robots will minimize the risk of healthcare-associated infections 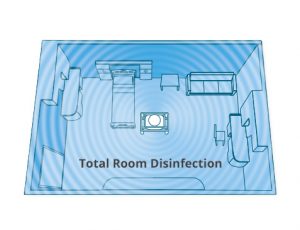 According to the CDC – Centers for Disease Control and Prevention, in the United States, 25 hospital patients are diagnosed with a health care-associated infection every day. The CDC ran a large randomized trial to test the efficacy of the germ killing robots finding that the germ killing robots reduced healthcare-associated infections by 30 percent.

“We’re starting in the burn unit because that’s a very vulnerable population and we never want those patients to have trouble with infections,” stated Thomas Talbot III, M.D., MPH, professor of Medicine and Vanderbilt’s chief hospital epidemiologist.

“We’ll deploy the second machine wherever it can be of greatest use,” Talbot said.

New decontamination robots at Vanderbilt University Adult Hospital use ultraviolet radiation to kill microorganisms that may linger on surfaces after routine disinfection.

The robots work alone in vacated rooms, with cabinets and drawers opened and curtains and hallway doors closed. From the hallway an environmental services tech uses a handheld computer to turn on the robot remotely. UV bounces around the room to reach all exposed surfaces, not just those in the machine’s direct line of sight.

The machines help eliminate guesswork, shutting themselves off once their sensors have registered set amounts of UV reflected back from surfaces in the room. In testing at Vanderbilt they required an average 25 minutes to decontaminate a patient room at their normal setting. A higher setting is used for rooms where a c. diff (Clostridium difficile) infection has occurred.

“For UV to be of benefit you have to continue to clean rooms correctly and continue to follow all infection control practices, like good hand hygiene,” Talbot said.

The hospital will monitor effects of the robots not only on infection rates but also on unit efficiency and workflow.

“We’ll be developing protocols to help optimize use of the robots without delaying patients arriving from the emergency department or the recovery room,” Talbot said.

Tru-D SmartUVC delivers an automated, measured dose of UVC to consistently disinfect a room from one position, eliminating human error and documenting disinfection results for each cycle. During the disinfection cycle, Tru-D’s microprocessors and instrument-grade sensors measure the necessary amount of UV energy that is reflected back to the robot to destroy pathogens throughout an entire room from one position.