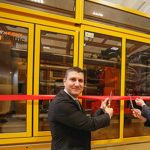 Committed to becoming a leading player in the Russian market, Pascal Medical has been working in close partnership with Husky to set up its state-of-the-art facility in Dubna, Russia, with the goal of creating an industry-leading manufacturing organization, capable of replacing foreign-import medical products with premium quality domestic production. Currently focused on disposable syringes, the company plans to expand its product range in the future to include prefilled syringes, infusion and transfusion systems, catheters, vacuum blood collection systems, and parts for epidural anesthesia.

Husky has been involved in all aspects of the project, including the planning for a 10,000 square meter factory, syringe design development, and selection of assembling machines, clean room suppliers and even personnel. With its combination of proven system and machine platforms and the industry-leading precision of its medical tooling branded under the Schöttli banner, Husky is able to provide comprehensive, integrated system solutions for the manufacture of medical disposables. Working with a single source supplier minimizes operational risk for Pascal Medical, allowing the organization to focus on producing the highest quality parts.

“We are thrilled to be working so closely with Pascal Medical as they complete the first stage of their project, and we look forward to continuing our partnership as they expand production lines and the range of injection molded products they offer,” said Robert Domodossola, Husky’s President of Medical and Specialty Packaging. “As was the case for beverage packaging in Russia twenty years ago, currently there is very little local production of medical disposables.”

The formal opening of PASCAL MEDICAL’s production plant intended for manufacturing single-use medical devices took place on September 27, 2017 in the territory of Dubna Special Economic Zone. The Governor of Moscow region Andrey Vorobyev gave the go-ahead to production. An agreement for construction of this high tech production facility was signed with the investor during the Saint Petersburg Economic Forum in 2016. Currently the first block of production lines are put into operation and three more are planned for launching in future. The plant manufactures the full range of single-use injection syringes, including insulin and tuberculin syringes. Production capacity of the plant is 450 million pieces of products per year.

“Our aim at Pascal Medical is to become a world-class supplier, producing the highest quality plastic medical applications. With Husky as a strategic partner in this effort, we feel confident in our ability,” said Alexander Fedorov, CEO of Pascal Medical. “We started construction on our state-of-the-art facility in July of 2016, and today the plant is open and fully operational. The expertise that Husky brings to the table in this industry is extremely valuable to us.”

The main feature of PASCAL MEDICAL is responsibility for quality of its products. Quality control on each stage of production and organization of work of each employee are aimed at achieving the main goal of the plant, which is to destroy the myth of low quality of domestic products and to build up trust in Russian manufacturers by offering consumers a product that complies with international standards of quality and matches similar foreign products in every aspect.

“When our plant becomes operational, total production capacity of existing Russian manufacturers of single-use syringes will be able to completely satisfy domestic demand for such products, though a share of imported products still remains very high. Now the main goal is to improve quality of Russian-made medical devices, including by implementation of quality management systems at enterprises and by enhancing efficiency of quality certification processes. Russian government and, in particular the Federal Service for Supervision of Healthcare and Social Development, already named such improvements as one of their priorities. This will allow Russian-made products to have a major share on our medical market and fully implement the government’s the policy relating to replacement of imported goods. And our new state of the art production lines operating in compliance with GMP can significantly contribute to success of this process,” said Alexander Fedorov, the general director of PASCAL MEDICAL.

With one of the broadest product lines in the industry, our equipment is used to produce a wide range of products for the beverage packaging, closures, thinwall packaging, medical, and consumer electronics markets. With more than 40 service and sales offices and employing approximately 4,000 people worldwide, Husky supports customers in over 100 countries. Our main manufacturing facilities are located in Canada, the United States, Luxembourg, Austria, Switzerland, China, India and the Czech Republic.

PASCAL MEDICAL LTD (former name, before October 07, 2016, was Signatum LTD) was registered on December 23, 2014. The company obtained the status of a resident of Dubna special economic zone, whereof the respective agreement was signed with the Ministry of Economic Development of the Russian Federation.

The goal of the project is to create a state-of-the-art Russian high tech production facility to manufacture sterile single-use medical devices. Implementation of this project is a contribution to solving one of the most important problems faced by Russia: substitution of imported medical devices with Russian made ones. In order to implement the project about 2 billion Russian rubles are planned to be invested in construction of a facility in the territory of Moscow region, intended for manufacture of single-use medical devices. The respective investment partnership agreement was signed with the governor of Moscow region, mr. Andrey Vorobyev, at the Saint Petersburg International Economic Forum.

The production will be supported by modern manufacturing facilities and state-of-the-art technologies that will ensure that the cost of production of final products will be optimal due to efficient use of raw materials, as well as durability and high reliability of utilized equipment. Our production is a complete production cycle, including in-house sterilization and in-house manufacture of medical needles. These factors will allow us to produce medical devices compliant with all requirements of national and international standards of good manufacturing practices (GMP).

This statement is based on the fact that even now, at the stage of design and initial stages of project implementation we have a team of highly skilled specialists with great experience in that industry, capable to develop, implement and ensure performance of necessary measures. In contrast to quality control through testing selected samples of such products, which can only guarantee that those selected samples (and maybe batches of products manufactured immediately before or after the selected batch) are suitable for their intended use, GMP standards represent an integrated approach and actually regulate and evaluate parameters of manufacture and laboratory testing.

Implementation of this project will allow us to introduce a product of stable and consistent quality on the market. Its high quality will be guaranteed by implementation of project decisions with strict compliance with requirements of applicable good manufacturing practices (GMP). The quality assurance system to be used for our production is intended to prevent errors and deviation by taking into account all factors capable to have an impact on quality of finished products from the very beginning (incoming inspection of raw materials, in-process control, finished products inspection) and to the completion of the production cycle. Quality control of both raw materials and components and finished products will be carried out using most advanced testing equipment. Testing laboratories of our facility will carry out over 100 types of tests each shift.